Tackling the threat of fishing gear on marine wildlife 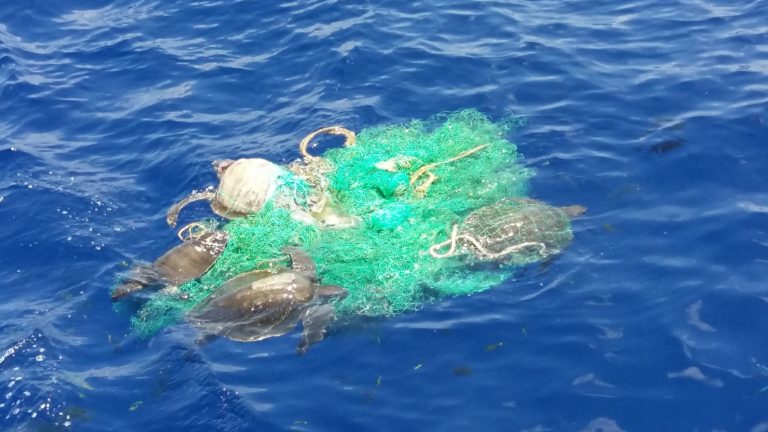 A short update by Brendan Carruthers from the The International Pole & Line Foundation (IPNLF) who, through funding from the Joanna Toole Ghost Gear Solutions Award, are tackling the issue of ghost gear and their devastating impact on marine wildlife.

In the world’s oceans today, marine wildlife are facing a constant existential threat. Commercial fishing ships, which can use nets of up to 6,500 ft (2,000 m) in length and 650 ft (200 m) in depth, lose or abandon vast amounts of fishing gear each year, which can drift for years at sea. These discarded nets, drifting FADs﻿, and other fishing equipment become known as “ghost gear.” Ghost gear has a devastating impact on local marine ecosystems by damaging reefs and injuring and killing marine wildlife trapped in floating nets.

The International Pole & Line Foundation (IPNLF) works to promote sustainable fisheries who use low-impact, one-line-one-hook practices that avoid this collateral damage. IPNLF is also committed to the removal of dangerous ghost gear from marine ecosystems.

On the island of Gemanafushi in the Maldives, this accumulation of ghost gear has become a serious environmental problem. Although commercial net fishing is banned in the Maldives, ghost gear originating from elsewhere in the Indian Ocean poses a threat to the local island ecosystem. Among some of the most impacted marine life are olive ridley turtles, a vulnerable turtle species that are overwhelmingly caught and trapped in these nets. The Olive Ridley Project, with whom IPNLF has partnered with to remove this dangerous gear, discovered as part of a survey that in 732 nets recovered, 601 turtles were found entangled in nets.

With funding and support from the Joanna Toole Ghost Gear Solutions Award, IPNLF is working to address the issue locally on Gemanafushi Island.

In February, IPNLF held a meeting with the local island council in Gemanafushi, fishing industry members, as well as the local Women’s Development Committee (WDC), and was met with enthusiasm from all groups to collaborate to remove dangerous ghost gear from the surrounding waters.

With the support of local stakeholders, IPNLF has helped to establish new protocols for the retrieval and inshore collection and storage of this gear by local fishers. This will not only help remove ghost gear but also promote the safe disentanglement of marine life caught in these nets. During these talks, the state fish purchasing company MIFCO generously volunteered facility space to house this recovered gear, and the Women’s Development Committee has also agreed not only to help in the processing of these materials, but also in the repurposing of recovered gear into various items that can be resold and recycled. This provides a crucial final link in the new proposed circular economy surrounding ghost gear. The Women’s Development Committee hopes this system will allow them to be self-sustaining through the creation and sale of ghost net derived products, and the IPNLF and ORP will be working closely with the WDC and local community to develop this process and create value from an otherwise waste material.

While the process for removing and repurposing ghost gear has been established, pandemic restrictions on fishing trips due to COVID-19 have stopped collection work from hitting its stride.

In spite of this, IPNLF has continued to work with partners so that all parties are ready to put these new procedures into practice as soon as restrictions are lifted. Based on the data collected so far, IPNLF is confident that local communities will now be able to recover and repurpose ghost gear at a rate faster than it lost by fisheries, resulting in continued reduction of dangerous ghost gear and clearing out of the waters around the island.

As the first winners of the Joanna Toole Ghost Gear Solutions Award, IPNLF looks forward to continued partnership with the local communities who are engaged to help remove and repurpose this gear and establish a sustainable ecosystem for future generations.