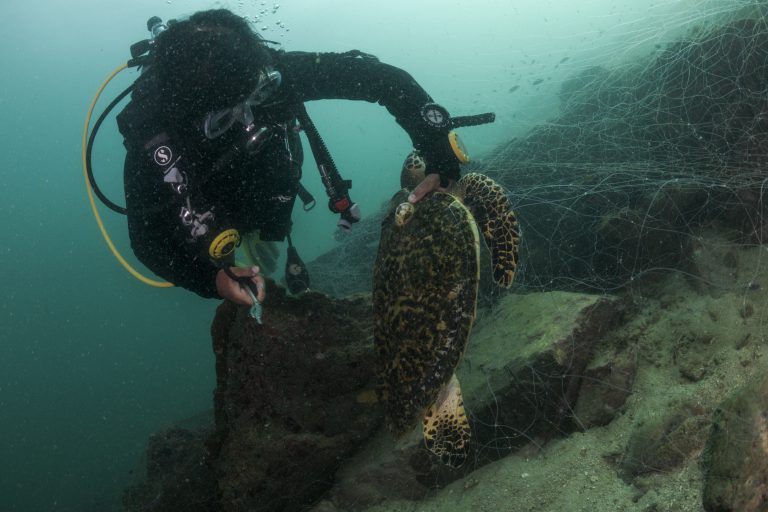 We’re excited to announce that World Animal Protection released a press statement this week to announce the winner of Jo’s Ghost Gear Solutions Award! During her last years Joanna worked tirelessly to remove this threat from our oceans, she co-founded the Global Ghost Gear Initiative (GGGI) and lead the development and implementation of the FAO Global Programme of Work on addressing ALDFG.

The Joanna Toole Annual Ghost Gear Solutions Award is a first-time award given to the most deserving projects that submitted compelling strategies to tackle abandoned, lost and discarded fishing gear, also known as ghost gear.

You can read the full statement below:

The Joanna Toole Annual Ghost Gear Solutions Award is a first-time award given to the most deserving projects that submitted compelling strategies to tackle abandoned, lost and discarded fishing gear, also known as ghost gear. The combined value of the prize is over USD $65,000 which will be shared between the winners. Ghost gear is the most harmful form of marine debris and one of the biggest threats to marine life in our ocean.

After an impressive round of submissions, the first winner of the award is UK registered charity, the International Pole and Line Foundation (IPNLF﻿). IPNLF will be working in collaboration with the Olive Ridley Project to implement a pilot project in the Maldives, with the aim of incentivising the removal of all ghost fishing gear from the ocean by small-scale tuna fishers. This project has the primary ambition of removing far more ghost gear from the ocean by weight than the modest amounts lost from their own fishing operations.

The second winner is the Stand Out For Environment Restoration (SOFER﻿) Initiative. Based in Nigeria, SOFER raises environmental awareness by working with young people, providing practical ways to change behaviours for the better. SOFER will receive a grant to contribute to their ‘Fishing Net Gains Nigeria’ Project. The project works to engage local fishing communities on best practice for reducing ghost gear through management, mitigation and removal. This project will work directly with fishers in Nigeria, Cameroon and Ghana.

A staggering 640,000 tons of ghost gear is left in our oceans each year – more than one ton every minute. This award will make our oceans a better and safer place for marine wildlife – something that Joanna dedicated her professional life to achieving.

Entries for the awards were reviewed by ghost gear experts from World Animal Protection﻿ and GGGI. Adrian Toole, Joanna’s father, judge and trustee of the Joanna Toole Foundation said: “For Joanna, her work was not just a nine-to-five activity – she was a devoted animal lover, who dedicated her professional life to this work. Her complete dedication to animal welfare has been an inspiration to many and the Joanna Toole Annual Ghost Gear Solutions Award instigated by World Animal Protection and the GGGI is a means of awarding initiatives that will rid the oceans of this menace to wildlife. I am honoured to have been involved in this project with the intention of carrying forward her mission.”

Steve McIvor, CEO, World Animal Protection said:
“Joanna was a fierce advocate for making our seas safer for wildlife, and I am delighted that this award will continue her legacy – I know that she would have been whole-heartedly behind the winners we’ve chosen. This award will carry on her work and make a positive difference for oceans that Joanna worked so hard to protect.”

Ingrid Giskes, Director Global Ghost Gear Initiative said:“This award is very close to our hearts and we hope that it will become a permanent feature of the drive to rid the ocean of ghost gear once and for all. Joanna was an inspiration, her collective effort to secure ocean health and animal welfare is admirable. We are proud to continue her legacy at the GGGI and we urge others to continue to support this work.”

In 2014, World Animal Protection’s Sea Change team, co-led by Joanna Toole, established the GGGI, a multi-stakeholder, public-private partnership committed to driving solutions to the problem of lost and abandoned fishing gear worldwide. The GGGI aims to improve the health and productivity of marine ecosystems, protect marine life, and safeguard human health and livelihoods. The GGGI currently brings together over 100 partners including the fishing industry, the private sector, academia, governments, intergovernmental and non-governmental organisations.

For more information about the GGGI, please visit www.ghostgear.org﻿